Cornish Rex cats make excellent pets. Aristocratic in appearance, they are charming, acutely intelligent, very affectionate and gentle whilst full of mischief, never seeming to grow old. Even fifteen year olds will still play like kittens. Some of the charming characteristics of the breed are their dog-like habits of following their owners and retrieving their favourite toy. A distinctive feature of the breed being their long toes, which enable them to use their paws like little hands. The breed is elegant, agile and very active, demanding constant companionship. So much so that in some instances where owners have been out at work all day their Cornish Rex has moved in with a neighbour! 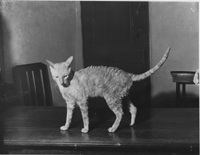 The Cornish Rex breed is the result of one of nature's miracles, a spontaneous natural mutation, which occurred in non-pedigree cats in Cornwall in 1950. It all started with the birth of Kallibunker. Serena a tortie and white short hair pet cat belonging to Mrs Nina Ennismore and Miss Winifred Macalister gave birth to a litter of five kittens. Four kittens were normal coated but the fifth kitten was born with a curly coat and his whiskers looked just like coiled watch springs. This kitten was named Kallibunker and was the original Cornish Rex. The father of the kittens was unknown but it is extremely likely it was Serena's litter brother 'Ginger' who was a short hair red tabby. The gene for Cornish Rex is inherited recessively so was most likely to appear when two closely related cats bred together.

DEVELOPMENT OF THE BREED

Following genetic advice, Mrs Ennismore and Miss Macalister embarked on a breeding programme to develop their Rex cats as a breed, this ended in near disaster as so much inbreeding was involved. Sadly they experienced so many setbacks that eventually they gave up, but not before they had exported a blue female Rex to the USA. This female 'La Morna Cove' was already pregnant to her sire Poldhu. Two kittens from the resulting litter - Marmaduke of Dazzling and Diamond Lil of Fan-T-Cee, were used to establish Cornish Rex as a breed in the USA. Back in Britain a cream and white bi-colour Rex son of Kallibunker's, Sham Pain Chas, had been given by Mrs Ennismore to her Veterinary Surgeon, Mrs Rickeard. Sham Pain Chas (the only fertile Rex male left in the UK) was then lent to Brian Stirling-Webb in a last attempt to establish the Cornish Rex as a breed. In 1959 a small group of breeders bred their pedigree short hair females to Sham Pain Chas and in 1960 the resulting variant offspring were bred together and produced a new generation of Cornish Rex. Cornish Rex have since been found to be compatible with German Rex.

There is a theory that the mutation for Cornish Rex may have been caused by radiation from the local tin mines. The effect of the Rex mutation not only altered the coat structure but also accentuated the characteristics of the domestic cat creating a longer, slighter but a more muscular and agile animal than its ancestors. With very muscular hind legs they are capable of amazing speed, quick starts and incredibly high jumps. Their fine and almost delicate appearance totally belies their tremendously muscular body and deceptively heavy weight. They stand high on long slim legs with long fine tails. Their large ears are set rather high on the head almost like a crown.

However, it is the coat of a Rex that is the main feature to differentiate it from all other breeds. Once felt never forgotten. In the best specimens it is short, soft, dense and luxuriant to the touch, feeling like crushed velvet. Neat and even waves cover the body and tail whilst the coat on the head, legs and paws is short and plush, but some even have tiny waves rippling down their legs and onto their paws as well. When handled they feel firm and because of their coats, warm to the touch.

At birth the still wet kittens are covered in curls, as the coat dries it develops into tight waves or ripples, looking almost like Persian lamb. Their whiskers and eyebrows are also curled, in some so tightly they form a little coil. As the kittens grow their coats and whiskers usually straighten. The whiskers become crimped and curved rather than the tight curl they were at birth. A percentage of kittens grow 'into' their coats which become little more than suede for a while, usually between 6-8 weeks of age, then their coat begins to grow and thicken. Some keep wavy coats throughout their kittenhood whereas in their denser coated cousins the waves may not return until approaching six months of age, some even later. A Cornish Rex coat usually looks at its best at full maturity, which can be anywhere between 18 months and three years. The whiskers and eyebrows are more noticeable on Bi-Colours as they are usually white and contrast with the coat colour.

Hand grooming is normally sufficient to keep their coats in good condition but in some of the longer or woollier coated cats, grooming with a soft bristle brush and a fine tooth comb might be necessary to coax the coat into neat waves. It is usually necessary to bath Whites and Bi-colours with a high degree of white, prior to shows, due to discolouration which occurs on their tails and hind legs. One of the benefits of having Rex is that their coat is so fine in comparison with other breeds, it is almost unnoticeable on most clothing, upholstery and carpets.

Many people who have been unable to have a cat due to allergies have had their wish fulfilled with a Cornish Rex but it must be emphasised this is not always successful. Whilst a high percentage of those who are allergic to normal coated cats can live quite happily with Rex, there are still unfortunately those who cannot. The only way to be reasonably sure is to spend some time in a 'Rex only' household. Even this is not always a true guide as it is possible to be allergic to just one particular cat. The coat texture does vary within the breed as does the pattern of moulting. Some moult so gradually as to be virtually unnoticeable others shed their coats all at once and go through a period of temporary baldness until their new coat emerges in the autumn. Various products have been introduced onto the market to apply to cats' coats to reduce allergic reactions but their efficacy has yet to be documented.

Although there are no points allotted for colour within the standard of points for the breed and despite the fact virtually all the early cats were dilutes, i.e. Blue, Cream, Blue-Cream, Blue Tabby etc. Cornish Rex are now bred in every imaginable colour and colour combination including the more recently introduced Cinnamon, Fawn and Caramel.

Due to the breed originating from very inbred stock, it is necessary to outcross to other breeds at regular intervals to introduce a larger gene pool and to maintain stamina. Obviously great care must be taken to use only the healthiest cats with good temperaments and of compatible blood type. The usual blood type in Cornish Rex is type ‘A‘. All the kittens resulting from an outcross mating will be normal coated variants but will carry the gene for Cornish Rex and when bred to either a Cornish Rex or another Cornish Rex variant will produce a percentage of Rex kittens.

Many of to-day's Cornish Rex bear a remarkable resemblance to the early cats bred in the 1950's which is as it should be for they are the cats the breed standard was based on. There are of course subtle differences in type from country to country. 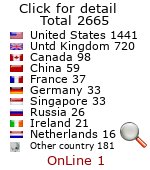